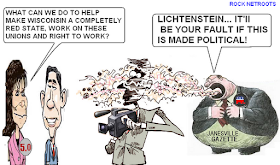 The Janesville Gazette issued their expected editorial defense for the local economic development group, Rock County 5.0, on Sunday. Titled, "Focus of Rock County 5.0 remains unchanged," the Gazette pretends like nothing happened but openly admits they would have preferred the film maker, Brad Lichtenstein, cover-up the conversation between Gov. Scott Walker and Rock County 5.0 officials Hendricks and Willmer - just like they apparently always do, and the Gazette went so far as claiming that Lichtenstein owed the RC5 that service because they granted him access to the meeting ...just like they do.

JG Editorial Excerpt: A stronger case of betrayal can be made against Lichtenstein for his treatment of some of the people who gave him almost-unrestricted access to their efforts and meetings. Those would include Diane Hendricks, Mary Willmer and the other members of the Rock County 5.0.

[...]Regardless, the release of the now-infamous clip with Gov. Scott Walker's "divide and conquer" statement about unions smelled of a "gotcha" moment intended to promote the film and advance a political agenda. The inevitable negative effects on Hendricks, Willmer and Rock County 5.0 obviously didn't enter into Lichenstein's decision.

So, instead of saying how proud they are of Brad Lichtenstein to have the gumption to produce a documentary that by chance exposed the duplicity of an economic development group and some of their members, they attack him. Truth is, I would not have expected anything different from this newspaper. But the admission they consider it a betrayal to not sweep pertinent information under the rug in exchange for access is something new, the admission that is, and you can bet this type of "protection" is leveraged.

Note: This Janesville Gazette editorial is not available on the Web as of this posting.
at 12:13 AM

My constituents can't read, but damn it, they can see videos!
http://editorialcartoonists.com/cartoon/display.cfm/111182/

What's scary is that Walker can win a third term this fall.